Getting caught up with the Venus Flytraps

And if you could write a soundtrack to all of that, no doubt it would sound an awful lot like the Venus Flytraps.

“I agree with the basement part, we're very underground,” commented singer Vondrella Raygun, “and 1966 was a great year in music for snotty teen angst. I wish it was sunny where we live. It's very dark here.”

The Venus Flytraps are an unapologetically edgy garage punk band hailing from the home of the Rock and Roll Hall of Fame, Cleveland. Formed in 2016, the group right now has only a few songs out publicly. By all appearances, though, the band’s all set to start causing a buzz.

They have one full-length album about ready to go. They’ve also caught the ear of of those who can share their music with a way bigger audience. Talking to Garagerocktopia via email, the band also consists of Kelly Venus on guitar, Aubrey O'Blivion on bass and Mike Hood on drums. Band members declined to provide legal names.

The music doesn’t chintz on the heavy beats and snarly attitude. At first listen, we thought West Coast vibe, but O’Blivion set us straight, saying it was a different emotions at play.

“Everyone's listening experience is subjective,” explained O’Blivion. “I'm from the West Coast so I appreciate your position, but our music is more informed by Rust Belt artists and midwestern economical depression than LA grime.”

Band members cited many of the influences common to bands that we profile on this blog, but they also threw in some history and biology, too.

“We’re all about the deep-seated, sick, carnal desires that turn your stomach and turn you on at the same time,” Venus advised. “Music with tension, frustration, anger and sincerity. We’re all working-class and we’re all fed-up and disgusted by the world at large where we’re treated like garbage and the people with the most power are dull, spoiled swine.”

“Real rock and roll is by and for the working class because it comes from that dissatisfaction. All of that influences us and comes out in what we play and how we play it.”

Raygun pointed more to artists, reciting a very familiar – and by our reckoning, complete – list of inspirations.

“For me it’s the usual suspects,” said Raygun. “The Sonics, Link Wray, Little Richard, Bo Diddley...all the best and wildest tripped out early rock n roll music, when singers were like Otis Redding and James Brown, real men who could just wipe the floor with the limp noodles who pass for singers these days.”

“I was lucky enough to see Bo Diddley when I was 13 and it was some of the most sci fi futuristic stuff I’ve ever seen to this day. His records will never get old because they sound like they’re from the future.”

Right now, the Venus Flytrap only have about four songs available to schlubs like us, but that’s about to change. A whole album will soon be unveiled, and Raygun says there’s a lot more where that one comes from.

“A full-length CD is coming soon,” Raygun reported. “And we’ve got the second and most of the third album worked out too, we just have to record them. By the time everyone is fully caught up on our debut, we'll have the second one all set to blow their minds back to the Stone Age.”

As a new band, they’re waiting their turn to perform at the aforementioned Hall of Fame. Right now, it’s all about getting established whenever and wherever they can, just like so many of the people enshrined in the hall.

Added Raygun: “We’ve been played locally by Treasure Trove Radio on WRUW and on some cool CSU stations. Genya Ravan is going to play us on her Little Steven’s Underground Garage program in March, which is cool because I've listened to Little Steven’s show since I was a kid. We used to listen to it in the park on Sunday over somebody’s car stereo. I remember hearing ‘Do The Clam’ by Elvis there for the first time. That's a funny record.”

The legendary New York club CBGB has rightly been called Ground Zero for New York  punk. Some of the most trailblazing bands of that time, such as the Dead Boys and the Cramps, were actually transplants from Cleveland. Venus Flytraps more or less gave their hometown its props but made clear  that staying long-term to ‘the Rock and Roll Capital of the World,’ as it has dubbed itself, is iffy at best.

“We plan on getting outta dodge right quick,” said Raygun. “At the same time, this is our home and it made us and gave us our outlook. A lot of great music and really a whole aesthetic and definition of rock and roll meeting b-movie junk culture comes from the Midwest and Cleveland specifically. It's a mixture of boredom and lack of outside influences. It kind of forces you to stay in more and reflect and watch horror movies. The guy who coined the term to describe it - psychotronic - Michael J Weldon is from here. He’s an Aquarius like yours truly.”

For Venus, staying in the city formerly known as “the Forest City” would simply be too suffocating.

“Cleveland has been kind to us but not so kind that we aren’t ready to leave,” answered Venus. “Don’t get me wrong, some cool stuff is happening here and there are people making great things but we wanna move and shake and see it all and you can’t do that playing the same bars to the same people all the time. We want to get a taste of everywhere and everyone and they’re gonna get a mouthful of us too and come back begging for more.” 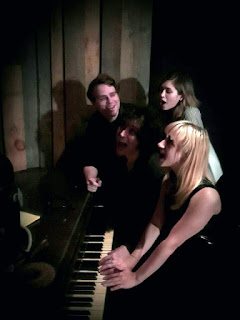 It’s all but inevitable that the Venus Flytraps will be compared to the Cramps, though in reality two bands’ music, outside of a few common influences, doesn’t sound very much alike. But, if you’re a new band and you have to be lumped in with somebody else, you could do a whole lot worse than the founders of psychobilly.

“There’s no shame in that comparison,” said Venus. “I think some people really feel like they need to be able to compare us to something so they can make sense of us but really what they’re doing is saying ‘okay, there’s a tall dark-haired guy and some girls with guitars so it’s gotta be like them,’ when in reality we don’t sound the same, we’re just both mixed gender rock and roll bands. We want, and do, make music that draws from all sorts of great, messed-up sounds, sights and sensations.

For Raygun, it’s way preferable to be compared to a band many still regard as cool, than to some of the over-played dinosaurs that still dominate FM radio airwaves, and pointed out that maybe preconceived notions might come into play.

“It's much better than being compared to Led Zeppelin or something awful like that,” said Raygun. “Better one of the best American Rock and Roll bands of all time. I think if we were four boys they'd compare us to the Stooges. It really shows that there's not much happening now except for us and a few others.”

“There are lots of quiffs and leather jackets but the essence is rare in music. Our definition of Rock and Roll is music made for sickos with switchblades and mental problems by sickos with switchblades and mental problems. All I hear is the same, safe designer indie pop-punk shit our generation has been getting force fed for literal decades. It’s a conspiracy! We have a mission: to kill off Rock music and bring back Rock n Roll.”

“It only exists when there’s people playing it and reanimating it. When they hear “Night of the Venus Flytraps” and the songs we're crafting now, they won't compare us to anyone; they'll say it sounds like Venus Flytraps. Then they’ll kill their parents and seize the means of production. Maybe.”
Raygun is planning something that for some, might be the most terrifying thing in the world: Revolution.

”I want to let everyone know that the time for designer rock and roll and fake psychedelia is bleeping over,” Raygun declared. “If you work in music in any capacity and you don't love music or you're just making music to fill up time then you'd better enjoy it now because we're coming for you in the night, little piggies.”

We have some other features already in the works here at Garagerocktopia. Artists have been sending us some very cool stuff. As always, we don’t make any guarantees in stone but we’re happy to say we’ve gotten a lot of very promising music sent to us, and we’re always happy to spread the word about about bands that are playing the way-out kinds of music we profile here. Send us a line and we’ll talk.

Also, we do have a Facebook page for this blog. We don’t put personal stuff on it – no pictures of grandkids or our dinners or politics or anything like that. What we do post are announcements about upcoming features, maybe extra stuff about the bands, and any cool music, movies or TV Shows we stumble across that might have even the most tangential connection with the music featured here. While we don't spend all day thinking about it, we do like "likes" if you're so inclined ...